There is a green hill … not far away 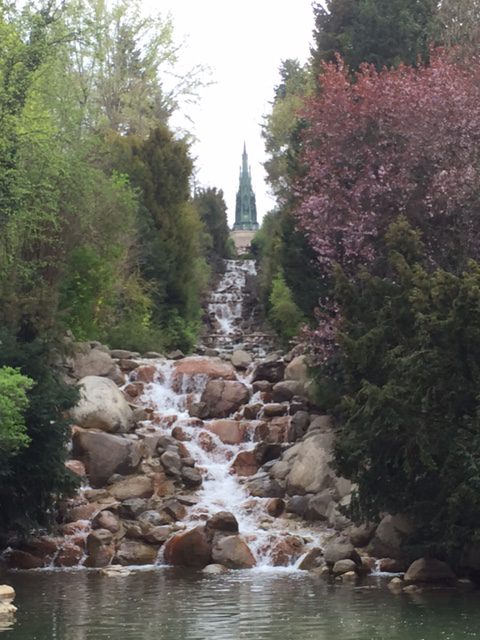 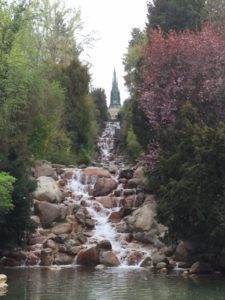 Viktoriapark in Kreuzberg is the perfect choice for a sunny spring afternoon. This pretty park comes complete with an impressive historic monument, an artificial waterfall, fabulous 360° views from the top of the hill and a cool Biergarten. Who could ask for more?  Few cities can compete with Berlin when it comes to green spaces and water. In fine weather, people flock to the Tiergarten and fill pleasure boats on the Spree. Or they head off to the outer edges, full of forests and awash with lakes. But why get caught up in the crowds or leave the city centre when there is a green hill, not so far away? 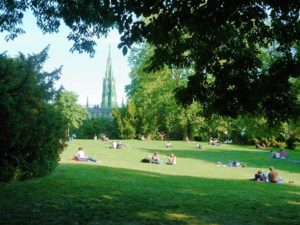 The park in summer

Viktoriapark’s history is fascinating. In 1821, on a hill known for its vineyards and originally called the ‘Tempelhof Berg’ or ‘Runder Berg’, the great architect Karl Friedrich Schinkel unveiled his national monument to commemorate the Wars of Liberation.  Schinkel’s neo-gothic cast-iron edifice consists of a 20-metre high column, adorned with twelve statues symbolising the twelve major battles against Napoleon and topped by a huge iron cross. It was commissioned by King Friedrich Wilhelm III of Prussia who instituted the award of the Iron Cross in 1813. In 1821 the hill was duly renamed the ‘Kreuzberg’ (Cross Hill).

Cast-iron statues around the monument

In 1878, the monument was made even more impressive by being elevated on to a massive granite and sandstone base. It was around this time that the land on the slopes of the hill was laid out as a public park and named after Princess Victoria, Queen Victoria’s eldest daughter and wife of the future Kaiser Friedrich III.

The monument seen from its base

Then, ten years later, Berlin’s Director of City Parks decided to give the park a mountain-like character by adding a 24-metre high waterfall, a miniature replica of the Wodospad Podgórnej waterfall in Poland, once a popular tourist destination for wealthy Berliners. As there isn’t a natural source of water on the Kreuzberg itself, water is pumped up the hill to feed the waterfall and the water circulation is now 13,000 litres per minute. The cascade over the rocks is an amazing sight and remains a big attraction.

Admiring the waterfall from above

Greater Berlin was formed in 1920 by merging Berlin’s suburbs into 20 boroughs and Viktoriapark found itself in ‘Hallesches Tor’. Only a year later, this borough was renamed Kreuzberg after its illustrious hill and now it is one of the most multi-cultural and liveliest areas of Berlin, known for its cafés, bars and nightlife. The fireworks in Viktoriapark on New Year’s Eve and the May Day street fairs all add to Kreuzberg’s explosive colour. 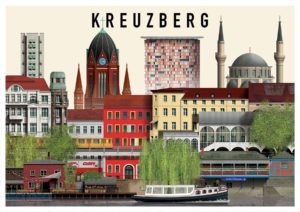 But last week in Viktoriapark, I felt a million miles away from any urban vibes. We had taken the U-Bahn to Mehringdamm, then turned right into busy Yorckstrasse.  We paused for a few moments of peace in the wonderfully-restored Sankt Bonifatius Church and then strolled through the calm courtyards of Riehmer’s Hofgarten towards Viktoriapark. We were already in another world.

The entrance to Riehmer’s Hofgarten

Viktoriapark was a haven of budding trees and birdsong. We climbed the winding path up to the monument and noticed several people walking or sitting among the rocks by the waterfall.  Once at the top, the view across the city is fabulous. You might not see the Brandenburg Gate, but there are plenty of other landmarks to pick out, including Potsdamer Platz and Tempelhof Airport. 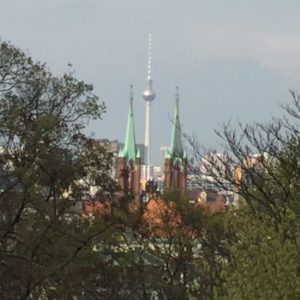 The Fernsehturm, seen through the spires of Sankt Bonifatius

When we’d soaked up enough afternoon sun and read every inscription on the 12-sided spire, we wandered down the grassy slopes to the legendary Golgatha Biergarten at the back of the park. Only a few tables and benches were occupied and the large sandy playgrounds were relatively empty. 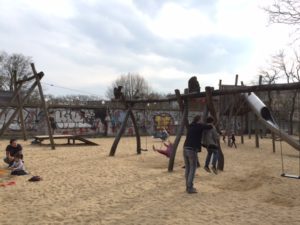 One of several large playparks

In summer, it’s a very different picture.  As the temperature rises, the atmosphere in Viktoriapark heats up too. The open spaces are packed with sunbathers, picnickers and musicians, and dogs and children frolic about in the waterfall. Watching the sunset from the steps around the monument is a must and Golgatha’s opening hours are from 9.00 am for breakfast until ‘Open End’. 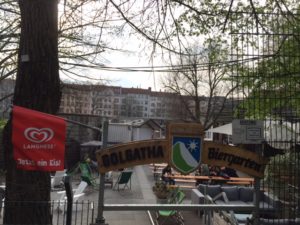 Although we didn’t come across it, there is apparently still a small vineyard in Viktoriapark which produces ‘Kreuz-Neuroberger’ wine. It was founded in 1968 when the vines were donated to the Borough of Kreuzberg by the town of Wiesbaden.  Only about 300 bottles are pressed each year and they are mostly used as ‘prestigious gifts’ presented on special occasions.  But I have heard that a 10 euro donation at the ‘district office’ will get you at a half-bottle. I will be following this up on my next visit to Kreuzberg. In the meantime you can find an interesting feature on the vineyards of Berlin by following this link. 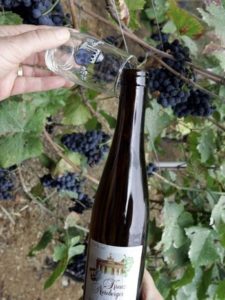