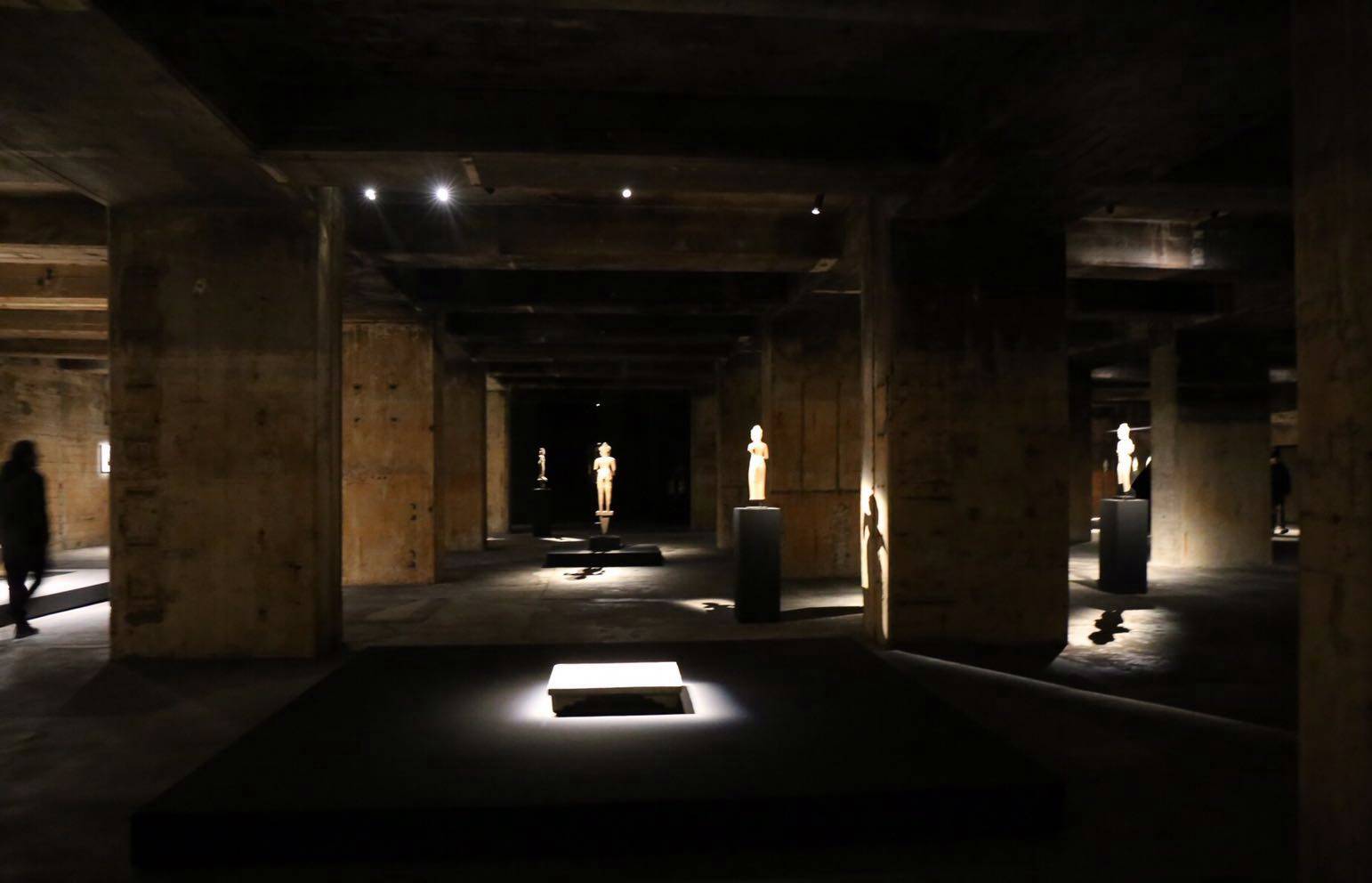 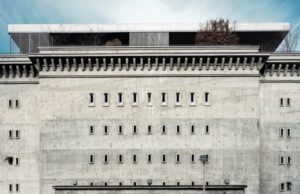 Berlin Unwrapped has details of the underground bunker tours organised by the ‘Berliner Unterwelten’ and the contemporary art collection in ‘Boros Bunker’, which is so popular that tickets must be booked weeks in advance on the internet. Now, a new bunker exhibition is attracting attention – the ‘Feuerle Collection’, brainchild of art collector Desiré Feuerle, who owned a gallery in Cologne in the 1990s and specialises in exhibiting antiques alongside contemporary art. 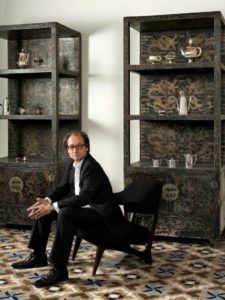 The Feuerle Collection’s home is a raw, cast-concrete building that served as a telecommunications bunker during World War II. As it was owned by the Reichsbahn and therefore the property of the GDR, it was left abandoned and fenced-off during Berlin’s years of division. From the outside, the bunker has the bleak appearance of a brutalist-style fortress, but the interior space has been miraculously transformed by British architect John Pawson into something approaching the vast imperial feel of the Domus Aurea, Nero’s ancient Golden Palace in Rome. 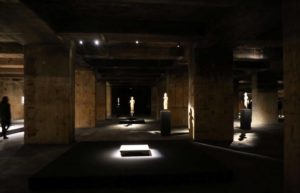 We booked our tickets for the Feuerle Collection on the internet a couple of weeks in advance, for a Saturday afternoon (the museum is currently only open at weekends) and took the U2 to Möckernbrücke. It was only a ten-minute walk along Hallesches Ufer, but already the overhead railway, the dark waters of the canal and the massive buildings on either side of the road combined to create a sense of severity. We arrived at the huge metal door of the bunker with a sense of some trepidation. 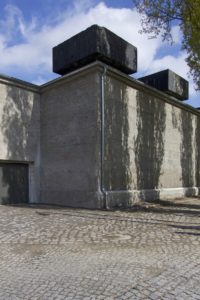 Entrance to the bunker

Visitors are ushered in semi-darkness to the lobby to place their bags in the lockers, then assembled as a group for basic instructions on how the tour will proceed. Photography is prohibited, so all the pictures in this post have been taken from official photographs provided by the Feuerle Collection on the internet. Our guide offered very little information about what we would find inside the exhibition itself; it was made clear that we would be making an individual discovery, although we could ask questions at any time. We were then ushered downstairs, where a pitch-black room awaited. When the door closed, a minimalist sound piece by John Cage was meant to be playing – a ‘gift’ from the collector, intended as a sort of musical prelude to the stark journey that each visitor was about to embark on. In fact, what we experienced was several minutes of total silence and were rendered both blind and deaf. 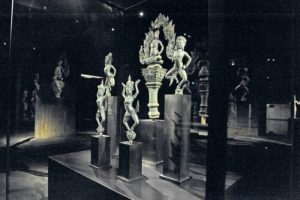 We were then told to ‘walk towards the light’ and found ourselves in a huge sub-terranean cavern, which felt like a hallowed tomb for art. Each ancient exhibit stood on its own pedestal or in a glass case with a few other similar creations and the clever lighting made everything seem precious beyond compare. Beautiful Khmer sculptures from the 7th to 13th Centuries made of stone, bronze and wood, cast imposing shadows across the bare floor. We wandered around in awe among the pillars that intersected the large space and made a framework for the exhibition. Mirrors had been strategically placed to enhance the experience and through glass we could see into an adjacent, empty section of the bunker with its tall regal columns gently illuminated. 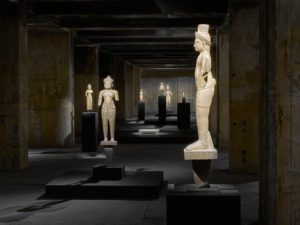 On some of the pillars and walls were black-and-white photographs set behind Chinese Qing Dynasty-era furniture. Contemporary artwork juxtaposed with antiques is a Feuerle trademark and, in this case, the ‘erotic’ nature of the photographs provided quite a talking point later. One of the central pieces on this floor of the collection was a ‘stone mat’ from the Han Dynasty (200 BC) and hung behind it, a contemporary picture of a mattress. This seemed a brilliantly-conceived contrast. There were no labels or descriptions on any of the items on display, so visitors must ask the guide, who stands discreetly to one side, if they want to learn the origin of a work. Since everyone walks around in studied silence, it seemed wrong to break the spell and we kept our questions to ourselves and gave way to a ‘collapse of time’. 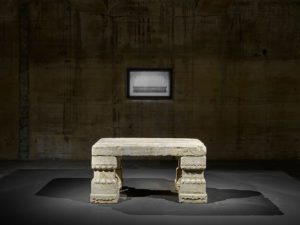 We were allowed just over 20 minutes for the first part of the collection, at which point our guide noiselessly approached each individual or group and invited us to gather in one corner of the room. Together, we made our way up to another huge space where more treasures were on display. A contemporary metal installation shaped as a hillside fountain was the first object of interest, but it was the lacquer Imperial Chinese furniture that stole this show. These pieces, exhibited on plinths, were truly magnificent. But as if to unsettle this feeling of pure beauty, once again Feuerle had used ‘erotic’ images, this time of submissive young Asian women, to create a juxtaposition between antique and contemporary art. It is a point of view we did not share. 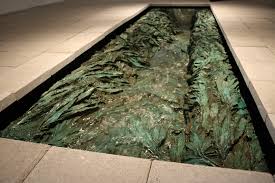 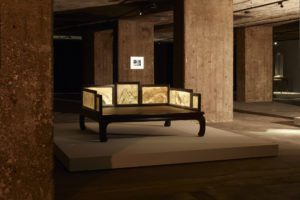 After a further 20 minutes or so, we returned to the lobby along a labyrinth of dark stone corridors, interspersed with high wells and hanging chains. Before leaving, I asked the guide for further reading material about the Feuerle Collection and was told that nothing was available yet. Perhaps it never will be. And perhaps it’s not important to know all the details. This bunker attraction needs little explanation, it just needs to be experienced. We had made a unique individual journey through time and space, among different periods and cultures and in the company of many a ghost. I will be back in 2017 when the ‘Incense Ceremony’ is added to this exhibition.

Entry to the Feuerle Collection costs €18. To book online follow this link.