A Tip-top Night Out 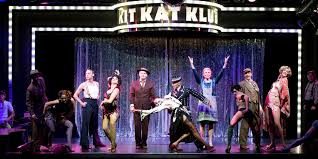 For the final blog of 2016 here is something joyful – a recommendation for a tip-top night out to a Berlin comic operetta; something to lift the spirit and warm the soul. It is dedicated to those people who were tragically involved in the terrible Christmas market massacre of 19th December. I had been standing on that very spot only a week before, buying Christmas Lebkuchen hearts, and while the dreadful event was unfolding I was posting my last blog about four magical markets. It is a very sombre scene now on Breitscheidplatz, where a mass of candles and flowers marks the scene of the murders. 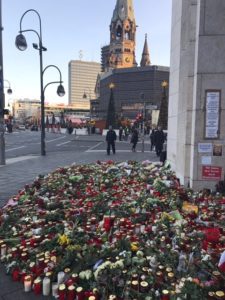 Flowers and Candles on Breitscheidplatz

But Berlin is the ultimate city of resolute survival. Tonight, there will be more fireworks than ever at the Brandenburg Gate and the show will go on at every venue imaginable. For a night out that conjures up the cabaret atmosphere of pre-war Berlin, I can recommend the Tipi am Kanzleramt, a marquee theatre hidden away in the Tiergarten, only a stone’s throw from Angela Merkel’s office and the Reichstag. The Tipi is a permanent venue for variety acts, cabaret, musicals and chansons, but has the nostalgic feel of a Spiegeltent, where travelling artistes bring music, magic and a touch of decadence to the general public. 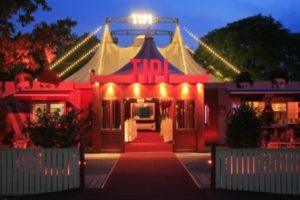 Until the end of January, Berliners are flocking to see ‘Frau Luna’ (Mrs Moon), a ‘burlesque and fantastic operetta’, composed by Paul Lincke, and first performed in 1899. Lincke had previously worked at the Folies Bergères in Paris and in 1908, he became principal conductor and composer for the Metropol Theater, whose spectacular revues were the capital’s biggest attraction. He is considered to be the father of operetta in Berlin, and has the same significance for the German capital as Johann Strauss for Vienna and Jacques Offenbach for Paris. On his 75th birthday, Lincke was made an honorary citizen of Berlin. Now this new production marks the 150th anniversary of his birth. 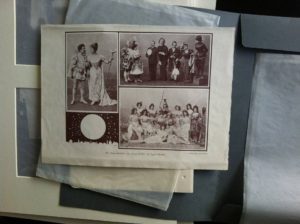 The original cast of Frau Luna in 1899 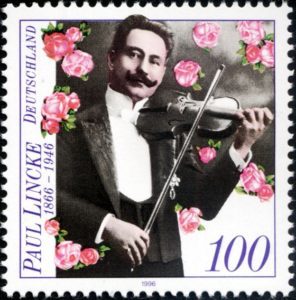 Frau Luna has a crazy storyline, which involves a group of ordinary Berliners going to the moon on a home-made craft. It’s full of mad scenes and characters, but the main theme of escapism and chasing dreams comes clearly through. There are plenty of foot-tapping and hand-clapping songs, especially ‘Das ist die Berliner Luft’, (‘That’s the Berlin air’) which is Lincke’s most famous composition and has become the well-loved anthem of Berlin. (Follow this link to see the Berlin Philharmonic perform it as a march). Frau Luna is not considered suitable for non-German speakers because of the German dialogue and jokes, but the music has instant appeal and there are slick dance routines. My English-speaking friend loved the glamour of the whole spectacle, staged in festive silver, black and white. You can get a flavour of the show from this trailer on You Tube. 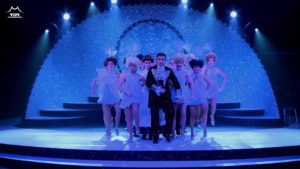 The 2016 production of Frau Luna

Not all the entertainment happens on stage in the Tipi am Kanzleramt. Members of the audience sit at tables and can order (or pre-order) food and drink. The menu features Berlin specialities as well as beers, wines and Sekt from Germany and Austria and prices are quite reasonable. People-watching becomes part of the fun and the traditionally-dressed waiters provide impeccable service, under considerable pressure. 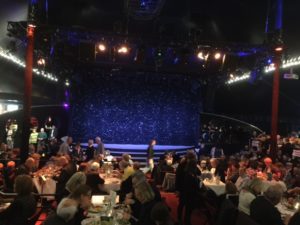 The audience arriving in the Tipi

The Tipi programme also includes plenty of shows and acts in English. In summer 2017, it features ‘Cabaret – the Musical’ once again and the Kit Kat Club will be recreated in the Tipi tent theatre. Tickets can be bought online and need to be booked early, especially for the best seats. Follow this link for the Tipi website. 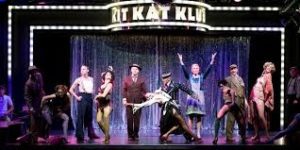 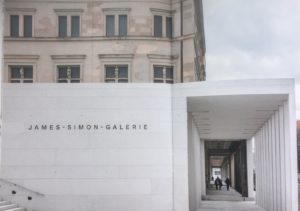